23 Improv Games to Refresh Your Actors After Break 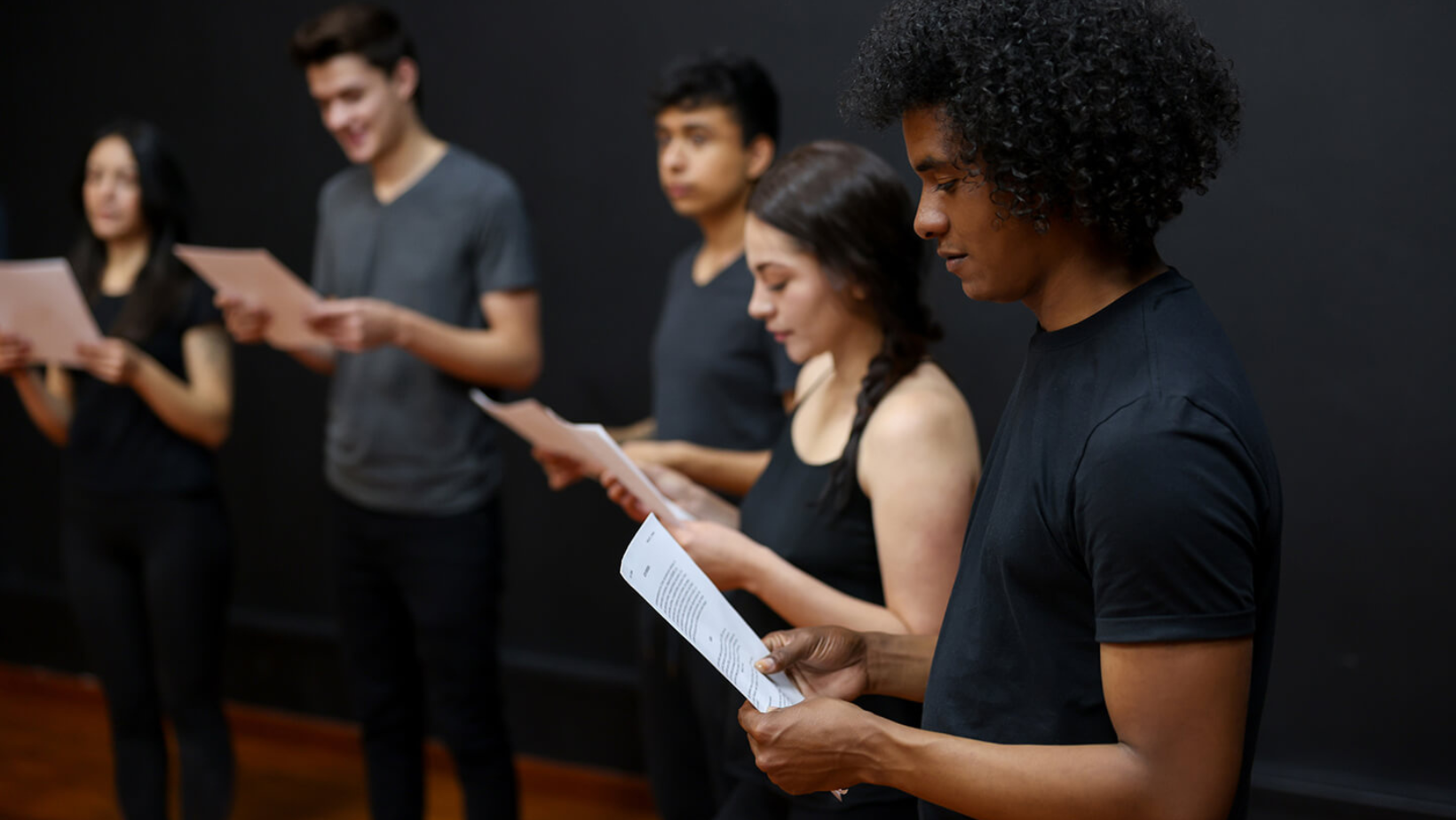 The dredges of early January can be hard to shake – after so much food, fun, and celebration, you may find it difficult to get your actors back into the swing of things come rehearsal time. If you’re looking to raise morale and inspire your students, we offer a list of 23 improv games to try.

For your first exercise, grab a tennis ball and have your actors stand in a circle. Gift one of your actors with the ball and ask them to name as many words as possible, starting with the letter of your choice, as the others throw the ball in the circle. When the actor runs out of words, you’ll start over with the next student and another letter. Whoever names the most words – thus getting the tennis ball the furthest around the circle – wins!

For this one, your students will pretend they’re on a movie set. Assign parts to a few participants – including the director, lead actors, and screenwriter. The director and screenwriter will set the scene and watch as the actors perform. Encourage the writer and director to step in and give direction, redoing the scene or switching to another as they see fit.

First, you’ll need a topic for a mock TV interview. Then, have your two participants – the interviewer and interviewee – perform the interview backward. (So, they’ll start the interview with farewells, and work their way back to the intro.)

Ask your audience for a common problem a person may wish to “drink away” at the bar. Then, actor one will enter the “bar,” proclaiming their woes to the bartender. The bartender’s job is to give the patron the worst possible advice for this silly issue. The more ridiculous the issue, the funnier the conflict resolution will be!

One actor will be the parent/leader of the scene, reading a “bedtime story” to their children. The other actors in the group will act out the scene for the audience. If you want to share the load, have two parents switch off telling the story, or have the “children” participate in telling the story as well.

Ask the audience/other students to write sentences on slips of paper, then place them all in a bucket. Have your actors begin a normal improv scene, but encourage them to pull out one of the lines from the bucket during peak moments – or moments of the audience’s choosing. Anything on the papers must be accepted and integrated into the scene.

This one can act as a low-stakes end to rehearsals. Your actors will stand around an imaginary campfire, reflecting on the day, performance, or class itself with appreciation. One by one, each actor will make their reflection and toss an imaginary log into the fire.

Have all your students stand in a circle, with one participant standing in the middle. The person in the middle will begin a monologue, and at any moment, another participant can slide into the middle to take their place – keeping the topic the same and smoothly taking over. The monologue concludes when all participants have had a turn.

Have your participants begin with a normal improv scene – preferably with baseline/neutral emotions. At any given moment, audience members or an “MC” can freeze the scene and name an emotion. After unfreezing, the actors must continue the scene with that emotion. (The more bizarre or extreme the emotion, the more fun you’ll have.)

Grab four actors for this one. Two players will act out a scene in total gibberish. The other two actors will be their “dubbers” – making up the scene and “translating” it to English. Those using the gibberish should rely upon physical humor/body language to give context clues to the dubbers.

Have all your actors stand in a circle. One actor begins by making a statement starting with “fortunately,” and then the next improviser in the circle continues the thought with an “unfortunately” statement. An example would be: “Fortunately, I finally got a job after looking for months.” And the next actor would say, “Unfortunately, the job is in Antarctica.” Keep going until all actors have played.

This one needs three actors and three chairs. The scene should begin with a driver and a passenger spotting a hitchhiker on the side of the road. The hitchhiker should have a defined personality – both in physicality and vocal quality, as well as a reason for needing a ride. Allow the scene to play out until they reach their destination, then start over with new players.

Start by having one actor perform an activity – it could be as simple as sitting on the couch, talking on the phone, or typing at a keyboard, but ensure the location is clearly laid out. Other players then enter and become other objects in the environment. Have the first actor (and others) act in the scene and “use” those props. The funniest part will be watching participants try and guess what the “objects” are before using them.

Ask your audience/other players for an unlikely place to find a lounge singer. Then, have a player improvise a solo song – Frank Sinatra style – welcoming people to that place. (Think mechanic, dentist office, funeral home.)

Improvise a simple scene after outlining the relationship between the actors in the scene. Then, replay the scene from the point of view of each of the other characters. You can replay several times, from several points of view, exaggerating emotions/actions based upon relationships.

Have four participants at the ready. Two will be puppets; they will offer lines of dialogue in the scene, but cannot move themselves. The other two will be the puppet masters, providing movements for the puppets.

First, have your group decide on a scene/scenario. Then, participants must act out the scene speaking only in questions. You can turn this into a competition by deducting points or striking players out for hesitating or answering in statements. The game continues until there is one player left or the scene naturally ends.

This one requires three actors. At any point in the scene, there should always be one player standing, one player sitting, and one player lying down. When one actor makes a move, the others must pivot to ensure the pattern stays the same. Make sure actors are justifying their moves and aren’t just sitting/standing/lying down at random.


Sell It To Me

This one is all about practicing persuasion, sales, and of course, improv. Each player has a short amount of time to grab a nearby object. Then, they have sixty seconds to create a sales pitch for that object and sell it to the group. To ensure players don’t get extra prep time, scatter these sales pitches throughout rehearsal and assign an actor at random.

This game requires two players to set the scene. Every time a player needs to do something difficult or unpleasant, another player jumps in as a “stunt double.” When the action is done, the stunt double freezes the scene and the original player continues.

A classic! First, one player makes a statement, and another responds with the titular “yes, and…” and continues the scene. When playing in a large group, actors should give cues with physicality as to which actor should pick up the story. The goal of the game is to create a cohesive storyline and ensure all actors get a turn to develop it.


The start of a new year comes with plenty of resolutions for your program. If you’re looking to elevate your theatre, let On The Stage help. Book a personalized demo today to get started.

2022 Curtain Call: This Year in Broadway

Set Strike: What to Keep and What to Toss