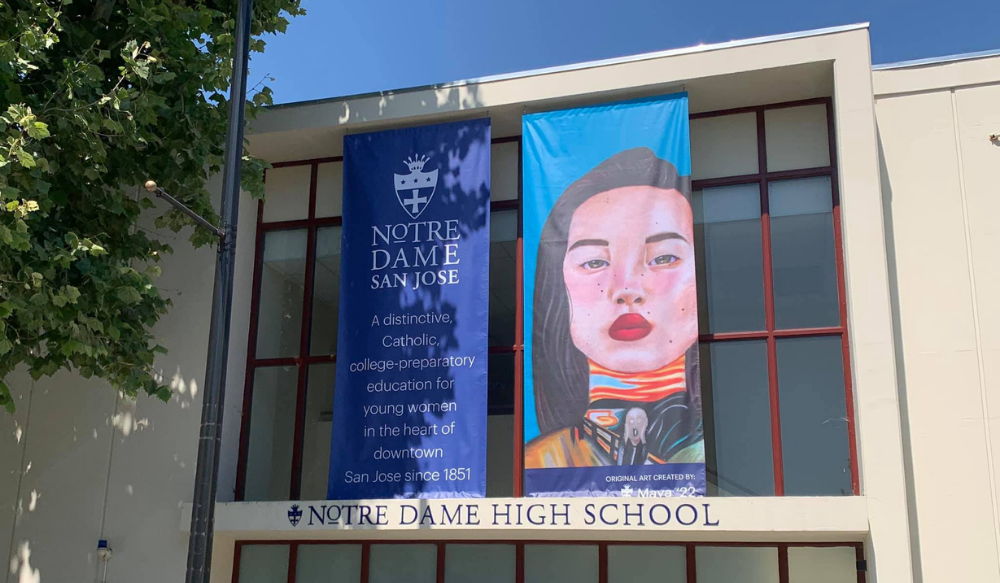 When sudden social distancing requirements made opening night impossible, Sarah Kane quickly adjusted with a "yes, and..." approach. Her new plan: not one but two online performances focused on script work, character development, and the art of acting on film.

Like at many institutions around the nation, the school’s spring musical went up on the proverbial chopping block due to the pandemic. Kane, a drama teacher at the all-girls Notre Dame High School in San Jose, California, wanted to create a virtual showcase to send her students off on a high note for the summer.

“I looked around and noticed that one of our local theater companies had been doing staged readings over Zoom, and I thought it would be a good opportunity for my performers to do something similar,” she says. “I reached out to one of our Spanish teachers and asked if we could partner together for a live reading.”

Kane’s choice of play couldn’t have been more fitting to the world’s current situation.

“I chose The House of Bernarda Alba, which is a story about a bunch of girls who are all stuck inside,” she says. “One of the Spanish teachers agreed to be our Bernarda. Our main goals with it were to have fun, act, and record it, so Spanish students going forward could have an English-language version of the play that they could watch.”

Unlike many high school productions facing similar circumstances, Kane was working at the disadvantage of having zero leg work for the show done prior to pandemic shutdowns. This meant that auditions, call-backs, rehearsals, and performances were all done virtually. After sending the script out to her students, she “asked them to read through it and tell me which parts they were interested in,” she says. “And since I’m familiar with them as their teacher, I thought about the parts that I wanted them to read for. So instead of a formal audition, it was really more of a call-back.”

Kane then organized Zoom appointments with her students, during which they would read through scenes with each other and get some direction. After casting the show, she set up a rehearsal schedule through Zoom, as well, which had a variety of moving parts.

“We had rehearsal like we’d normally have it, 4-6 Monday through Thursday,” she says. “I put together the schedule so that people were reading different scenes at different times; not everyone had to be there every day, or all the time. We had very specific call times.”

Rehearsing virtually with “thirteen different students who were going stir crazy with nothing else to do,” Kane says, had its triumphs and failures.

“To a certain extent, they were very easy to work with,” she says. “But if they didn’t show up to rehearsal, I had no idea where they were. It was stressful, but it was pretty much the same as organizing any other sort of rehearsal schedule.”

Enter On The Stage (Right on Cue)

As Kane and her students were in the final stretch of preparing for their performance, On The Stage was also getting ready to launch their new virtual performance platform for theaters. The timing was kismet for a collaboration.

“I found out about the On The Stage theatre streaming platform the Wednesday before the show went up. I just sent a lot of emails, like ‘Hey! Can I use this, please, please, please?’ And they were so responsive,” she says. “I got answers so quickly, and I was talking to real people that I’d interfaced with before when using On The Stage’s ticketing tools. So I felt familiar with them, like I knew them and we were working together to make it happen.”

The cast may not have had time to take full advantage of the new platform's virtual audition and rehearsal management features, but with help from On The Stage, Kane says that their live reading of Bernarda Alba went well.

Throughout the entire process, Kane worked hard to cultivate and retain the spirit of camaraderie that live performances often bring, in part by continuing an old and beloved custom at Notre Dame.

“We have a tradition before shows where we cross our arms and hold hands in a circle and pass the energy around that circle,” she says. “We tried to do that on camera, where we crossed our arms so our hands went off screen, making it look like we were all holding hands with each other. We closed our eyes and all took a deep breath. It’s amazing how much that actually worked, however silly it seems.”

The show was such a success that a few weeks later, Kane partnered with One The Stage again, this time in collaboration with Notre Dame's English department, for a virtual performance of The Crucible. Both shows, Kane says, were well attended … for good reason.

“I think teachers and administrators miss seeing their students,” she says. “Any chance that we can get to see them, whether it’s performing or doing something else, we’re excited about that.”

Kane learned a few good lessons this time around, as well.

“I joke with my student leaders when they’re getting worried during tech week. I say, ‘Guys, we only have to get this show to 70 percent, because the audience will add that extra 30 percent.’ There’s just that energy,” she says. “When you do a virtual show, especially a where your audience isn’t even on the [screen], you don’t have any connection with them. It was very different; the students had to do a lot more work.”

Like any good director, Kane thought outside the box to rectify the situation and bring energy to the performances. And she found those solutions in surprising ways, adapting some of the simplest elements of rehearsal and performance for a virtual milieu.

“The thing that made them the most engaged and most energetic was anytime they had to pass a prop to each other [through the screen],” she says with a laugh. “It’s just so much fun. The perfect timing is tough. Or, anytime they got to interact with props or a costume. We all made Puritan hats, like little kids make for Thanksgiving. It helped them understand that we’re doing this for fun; we’re doing this to get in character and for the energy of the show.”

With two virtual performances under her belt and a pandemic still raging, Kane says her experiences with On The Stage have changed her perceptions of her creative and logistical horizons.

“About four years ago, we did a show that was a collection of suffrage plays from the women’s suffrage movement, and we live streamed it. But it was so hard – we had to set up a hosting site and figure out all the links and how we were going to get people to access it. I think that the way On the Stage does it is great.”

This time around, with new tools and a greater sense of urgency, she came at the challenge from a different angle:

“The work that we did really focused around the basics of how you approach a character, how do you approach a text, what do you learn about your character from their interactions with other characters," says Kane.

But that doesn't mean that she feels constrained to a limited vision.

"If we can do anything even vaguely resembling a live show [in the next few months], it’s going to be a small piece to a small audience,” she says. “So what if we had kids in different locations with cameras set up? Maybe one’s in the quad, and one’s on the stage in the gym, and one’s in the chapel, and one’s in a classroom, and we do more site-specific pieces. Then we’re able to broadcast that as part of a festival or something. It really expanded my thoughts of what a performance could be.”

Already an advocate for On the Stage’s easy-to-use software for traditionally staged shows, Kane is most enthusiastic about the all-in-one, streamlined features that the company now offers for streamed performances.

“The thing I love most is that all of these tools are already linked to a ticketing system. I’m so comfortable using it, and it’s already been so successful for me and my program,” she says. “Being familiar with the tools already meant that the second time I went through it, I was even more familiar with how I could utilize everything to set up the whole show – the auditions, the rehearsals, the dress rehearsal and the performance, which I really liked.”

And while the pandemic has surely created turmoil and upheaval in the theatre community, Kane and her students found a variety of bright spots through their two virtual performances.

“I loved being able to partner with other departments on campus," she says. “Kids who wouldn’t normally do theater participated because the stakes were lower, and my students who were already confident actors got leadership experience in introducing new people to the world of theatre."

10 Plays with Co-Curricular Content...that You Can Stream Online!