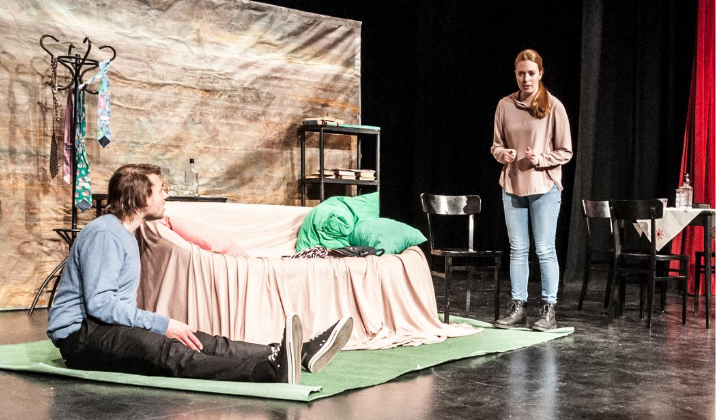 When producing theatre for online performance, simplicity is often the key to success. Whether you have the relative luxury of your cast and crew working together in one space or each participant is logging in from their own, physically distanced location, a small production is much simpler to mount in a way that meets both your creative and necessary safety standards.

These eight shows featuring small or flexible casts adapt perfectly for non-traditional performance. And, thanks to Stage Rights independent theatrical publishers, they're all available for streaming rights:

Other details: Set on a green, hilly highway with inflammatory political ads and other road messaging. Projections and virtual backgrounds can work well to create the visual scene.

Synopsis: A road trip may be just what Hannah and Cooper need to salvage their marriage from the wreckage of a recent tragedy. While Hannah is content to play car games, Cooper is determined to confront the details of the traumatic event that has led them on this journey to reconnect. As they fight through the traffic and the secrets between them, Hannah and Cooper travel in and out of their memories and must both question whether they can trust each other— or themselves. At once humorous and heartbreaking, A Version of Events masterfully explores the choice between truth and peace in a marriage.

Recommendation: A good choice for the intimacy of a streamed production, as the material tackles issues of relationships and honesty.

Other details: Presented through a series of monologues; funny.

Synopsis:Over the course of a school year, six inner-city high school students are forced to speak with the new school counselor. Through a series of monologues, we meet a diverse group of students including: Ruby, a foster kid who struggles with sobriety as she ages out of the system; Wade, whose Asperger’s poses a unique problem for him when he develops his first crush; and overweight Marcy, an aspiring poet devastated by a cruel prank. Their struggles challenge the experience of the school counselor, who discusses her work in therapy sessions of her own. Beautifully drawn, funny, and heartbreakingly poignant, All My Distances Are Far turns the audience into a silent confidant as each character struggles to make it to the end of the school year.

Recommendation: Good for both school and community theatre. The monologue format makes this an ideal piece for physically distanced production.

Other Details: Deals with themes of dating, relationships, love, flirtation, hope, and regret. Set in a Chinese restaurant, a subway platform, and other popular locations for singles around the city.

Synopsis: The same combination of humor and heart that made ​I Love You, You’re Perfect, Now Change​ a regional hit will have audiences falling head-over-heels for this sketch comedy concoction. In a series of vignettes, eight couples "Bumble" through the frenzied world of dating in search of "eHarmony" and a "Match" that lasts. With all of the pickups and hiccups that come with first impressions and final goodbyes, Dating: Adults Embracing Failure "Tinder-ly" proves that love can conquer even the world’s worst one-liners.

Recommendation: With storylines based in the awkwardness of 21st-century dating, this piece translates especially well to a virtual performance format.

Synopsis: Henry Devigne is reunited with his lover from a past life, through the dark magic of an enchanted portrait. The only catch is: he has to give up his soul to keep her. He's more than happy to do it, but their satanic wedding doesn't go as planned.

Recommendation: With a 42-minute run time, this play could pair well with another short piece for a themed program. Or, make the most of the conveniences of streaming and produce an ongoing season of shorter works.

Cast size: 3F; mid-30s, late 30s, and late 20s – any race or ethnicity, but inclusive casting is required to reflect the diversity of the setting.

Recommendation: Community theatre audiences love this show! Plan for lots of audience engagement, for example, by including a virtual talk back after the performance.

Other details: PG-13 content rating. Deals with themes of insanity, SciFi, Truth, Reality and Perception. Regarded as school friendly and one of the plays for school theater acceptable by the masses. Does involve some material that may be viewed as sensitive for certain students. Set in a Police Inspector’s office, residential foyer and attic laboratory.

Synopsis: When a great discovery turns deadly, a highly regarded scientist is forced to choose between trusting his eyes or following his brain in order to survive. H.P. Lovecraft’s tale of insanity and science gone awry comes to life in this chilling adaptation.

Recommendation: Part of the same Wicked Lit series as The Ebony Frame, this piece is just right for a double bill of not-so-short shorts. May be performed for school audiences with caution.

Other details: Themes include school shootings, adolescence, bullying, angst, breaking stereotypes, outcasts, and nerd culture. Set in different locations with quick changes. Can use a projector or virtual backgrounds for set design and added thematic context. Transitions between scenes are fast.

Recommendation: A thought provoking treatment of contemporary cultural issues. Would be well paired with supplemental programming, such as a virtual talk back or roundtable discussion, to address the topics raised.

Other Details: Set in the interior of a small, depressing apartment during a snowstorm. Dialogue should be fast-paced. Themes of family, sibling rivalry, broken dreams, and disappointment.

Recommendation: Filled with witty banter and playing off the dynamics of long established relationships under pressure in close quarters, this piece allows the acting to really shine in a virtual or live-streamed format.

Other Details: Each play in the Red Bull Shorts series runs 10 to 20 minutes in length.

Recommendation: This series offers a variety of works that can be combined to suit any audience, whether you're producing a program of one-acts or streaming a full season of shorts.

Cast Size: 4F (Flexible) Other cast members may be added for authenticity

Synopsis: This smash Off-Broadway hit takes you to the 1958 Springfield High School prom, where we meet Betty Jean, Cindy Lou, Missy, and Suzy: four girls with hopes and dreams as big as their crinoline skirts! As we learn about their lives and loves, the girls serenade us with classic ‘50s hits including “Lollipop,” “Dream Lover,” “Stupid Cupid,” and “Lipstick on Your Collar.”  In Act II, the Wonderettes reunite to take the stage and perform at their ten-year reunion. We learn about the highs and lows the girls have experienced in the past decade and are charmed to find that no matter what life throws their way, they will conquer it together. Featuring over 30 classic ’50s and ’60s hits, The Marvelous Wonderettes will keep you smiling in this must-take musical trip down memory lane!.

Recommendation: While musicals present technical challenges for virtual production, this show is ideal for streaming a traditionally staged performance to remote audiences.

Schedule a 20-30-minute call today to see if On The Stage is right for your organization.

Reasons Why Hybrid Performances Are Here to Stay